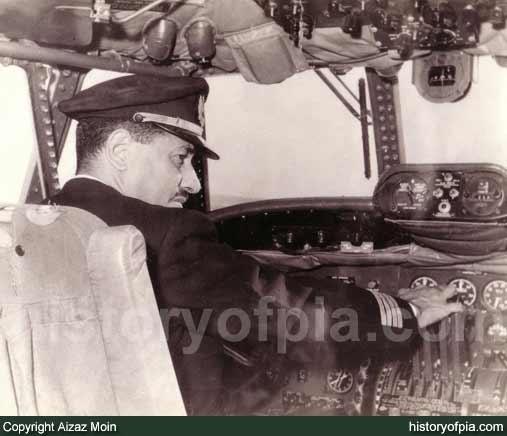 He studied at Colonel Brown's Public School in Dera Dun where he obtained his Senior Cambridge. At Partition time in 1947, Moin emigrated to Pakistan with his parents and his new 17 year old wife Farhat Jabeen Haqqi, a first cousin.

Upon entry to Pakistan he found employment with Orient Airways as it was always his dream of becoming a pilot. Whilst at the same time continuing his pilot training at the Karachi Aero club, carefully managing his income to provide for his family as well as his training. In 1951 Moin was recruited in as a pilot, flying Douglas DC-3 Dakota and in 1952 he was posted to the Eastern sector under the legendary, Capt. M.M. Haq. During this tour of duty, Capt. Moin was taking off from Chittagong airport when a vulture collided tearing into the cockpit through the windscreen and spraying Capt. Moin's face with glass. Undaunted, he landed the plane himself because his co-pilot was a very young pilot who was flabbergasted at the event. He was scarred for life after the incident. But his skill was duly recognized by the chairman Orient Airways, Mr. Isphani.

In 1952 he was posted back to Karachi where he was promoted on to Convair initially as First Officer, quickly moving on to Capt. In 1954 he was sent to Holland to learn to fly the Lockheed L-1049 Super Constellation with KLM who were flying the same aircraft at the time. PIA was born at this time, out of the merger with Pak Air and Orient Airways. He was therefore one of the pioneers of PIA.

Capt. Moin now amongst the senior Captains of the airline had the privilege of flying as the VIP pilot for a number of visiting dignitaries for overseas who were visiting the fledgling nation of Pakistan. Amongst them Celar Bayar, President of Turkey, Chou En-lai, Prime minister of China, and Shukri al-Kuwatly, President of Syria. In 1960 Capt. Moin was sent to New York to learn to fly the Boeing 707 and later that year ferried PIA's first jetliner (a Boeing 707 leased from Pan American World Airways, registration N723PA) from New York to London, from where Capt. Anwer Masud Khan, another legend of the airline and Capt. Moin's dearest friend, flew the plane on to Karachi on it's maiden flight. While on a flight from London to Karachi, in April 1961, Capt. Moin was struck down by a heart attack. He was later grounded and held various desk jobs in the airline for the next 6 years at the end of which he suffered another heart attack and died in Karachi at his office at the age of 43 years.

My very special thanks to Aizaz Moin for information and photo.

I would have to say that 43 years of age is quite young for someone to die. My father instantly recognized Capt. Moin's pictures when I last showed these to him.

The maiden flight of 707 from London to Karachi also broke flying-time records. The 707 also carried a sticker proclaiming the feat for some time (I wonder if there are pictures of the plane with the sticker floating around?!)

Nasir wrote:I would have to say that 43 years of age is quite young for someone to die. My father instantly recognized Capt. Moin's pictures when I last showed these to him.

The maiden flight of 707 from London to Karachi also broke flying-time records. The 707 also carried a sticker proclaiming the feat for some time (I wonder if there are pictures of the plane with the sticker floating around?!)

Unfortunately its getting younger. A University friend of mine has died at the age of 39 of a heart attack.

Not to hi-jack the post, but is the mortality rate of Pakistan changing? Are Pakistanis actually dying younger?

No, I'm not panicking just based on two anecdotal occurances. My own uncle died in his late thirties, but then again, he was a smoker and a drinker (a tea drinker, mind you -kaardhi hui chai -very kaali kind

), so someone's lifestyle may push them towards their maker a little earlier then anticipated.
Top

My uncle (mamoon), died at the age of 36 having blood cancer. He was not a smoker nor a Chai drinker. Fate!!!
Adnan
Top

May Allah give peace to the souls of all who have died. Ameen
Top

I think my uncle received peace to his soul quite some time back (he passed away when I was quite little), but thanks for the blessing anyway