Residents have been advised to dump sacrificial animal offal in designated areas. Peshawar Airport Manager has written a letter to the Provincial Government to express concerns over dumping of garbage around the airport attracting birds and threatening safety of aircraft.

The letter also seeks assurance from police stations to prevent general public from dumping sacrificial animal offal during Eid al-Adha around the airport.

The Provincial Government also has been asked to launch public awareness scheme on bird strike hazard.

Pakistan Air Force (PAF) Flight Safety at PAF Base Samungli is going to launch campaign on bird strike hazard and pamphlets will be distributed among general public.

People living around PAF Base Samungli/Quetta International Airport have been requested to dump garbage at designated for the safety of civilian and military aircraft.

Pamphlets were distributed among general at the end of walk.

Garbage in undesignated areas attracts large birds like kites and vultures that hit aircraft like missile/bullet and cause loss of aircraft, pilots and general public/property on the ground.

Animal remains should be dumped in designated areas or buried in ground for clean environment.

Such precautionary measures can ensure safety of PAF aircraft and pilots. Pamphlets/brochures with information about bird strike hazard were distributed among shop owners/meat shops and general public in areas around Peshawar Airport before Eid and during Eid holidays.

Bird strike hazard awareness campaign has been launched in areas around Sheikh Zayed International Airport in Rahim Yar Khan. Residents of areas have been advised to maintain cleanliness for controlling bird movements for flight safety.

Deputy Commissioner Multan has formed a ten-member committee to control birds around Multan International Airport for the safety of flight operations.

Committee will take steps for the removal of garbage around Multan International Airport. It will also taken action against marriage halls and hotels throwing food items in open area that attract birds.

Action against users of laser lights will also be taken by the committee.

RAWALPINDI: The local police and district administration have been told to restrict pigeon and kite flying in the vicinity of Pakistan Air Force (PAF) Base Nur Khan, where coronavirus relief flights as well as operational flying and VVIP flying commitments are undertaken. 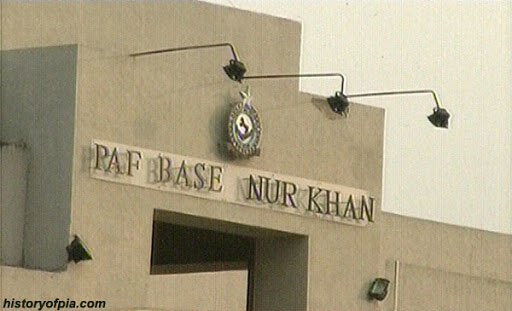 Bird strikes can cause millions of dollars worth of damages to aircraft and engines; airports are responsible for bird control, and bird shooters are deployed near runways along with other preventive measures.

Following an increase in pigeon and kite flying, aprovincial bird hazard control committee was formed in March this year. In its first session, the Punjab chief secretary had reiterated that flight safety hazards around flying bases would be dealt with as a priority.

According to a senior police official, Nur Khan base authorities have sought the police and administration’s help to implement section 144 around the airbase in order to restrict kite flying and pigeon flying in the area.

The authorities believe these activities post a potential hazard to aircraft safety and could result in serious consequences, particularly to the aircraft, engine and propellers.

The base authorities have told the administration that extensive flying operations, including operational flying, coronavirus relief flights and VVIP commitments, take place at the base and these hazards could damage multi-million dollar machines, which not only causes a loss to national assets but also effects other activities during a war situation.

They said aprovincial bird hazard control committee has been formed and its first meeting was held on March 14, chaired by the Punjab chief secretary.

The authorities said joint efforts are needed to curb these hazards.

Flying and selling kites has already been banned by the Punjab government.

TOBA TEK SINGH: The games of kite and pigeon flying, like birds, are dangerous for the Pakistan Air Force (PAF) fighter planes.

This was stated at a bird hazard control committee meeting held at PAF Base Rafiqui - Shorkot Rafiqui on Saturday.

Base Commander Air Commodore Shoaib Khan chaired the meeting in which flight safety officer Flt Lt Shabeeb Durrani said the birds and kites which collided with fighter airplanes endangered the lives of pilots.

He urged the participants to launch an awareness campaign in their respective districts, especially in areas around Rafiqui airbase, so that citizens could keep the atmosphere clean. 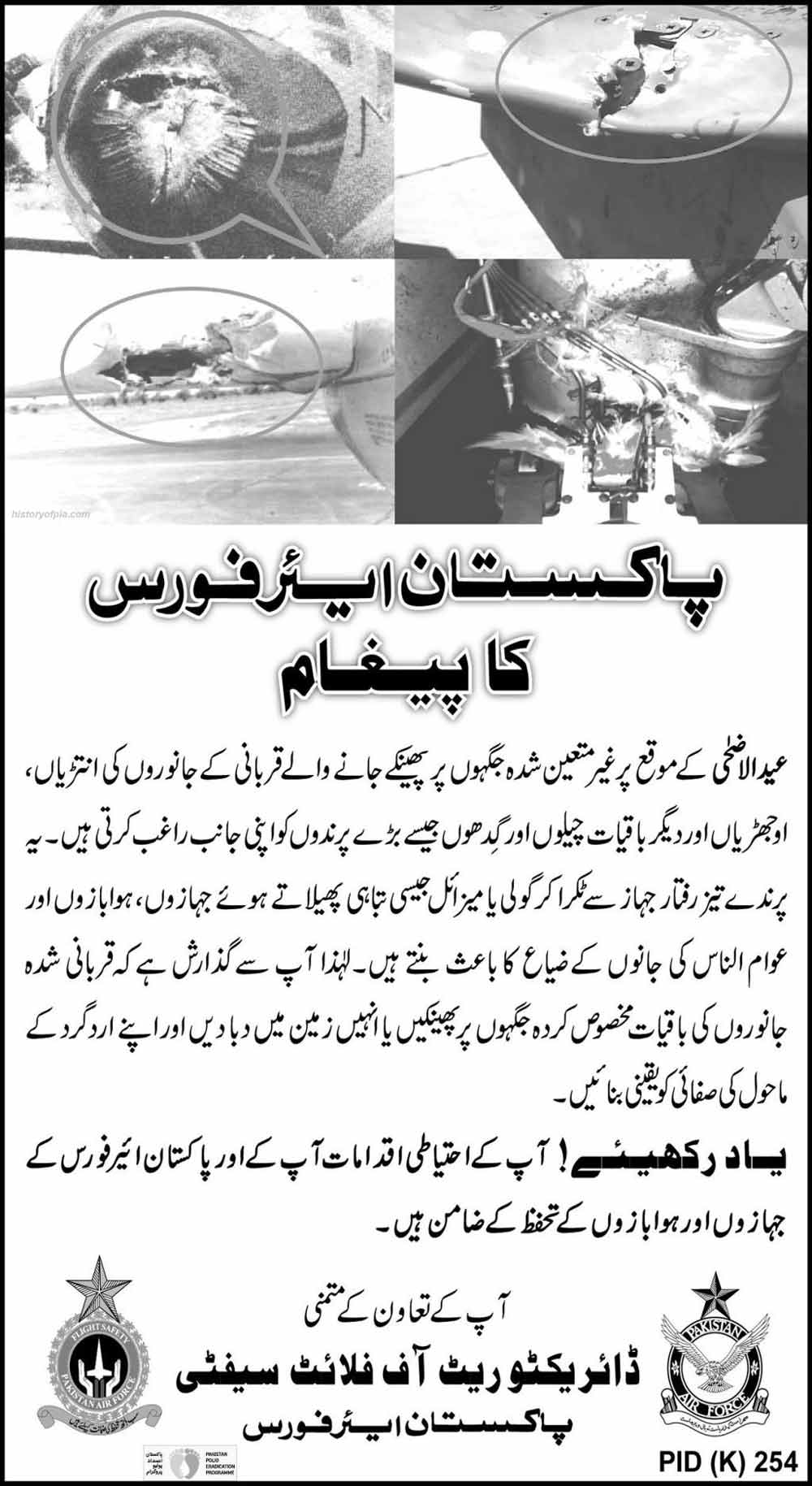 Director General Pakistan CAA directive on the subject of bird aircraft strike hazard (BASH) issued on July 27. Air Port Managers (APM) advised to use their power to issue legal notices to violators for the safety of flight operations and to keep birds away from airports. 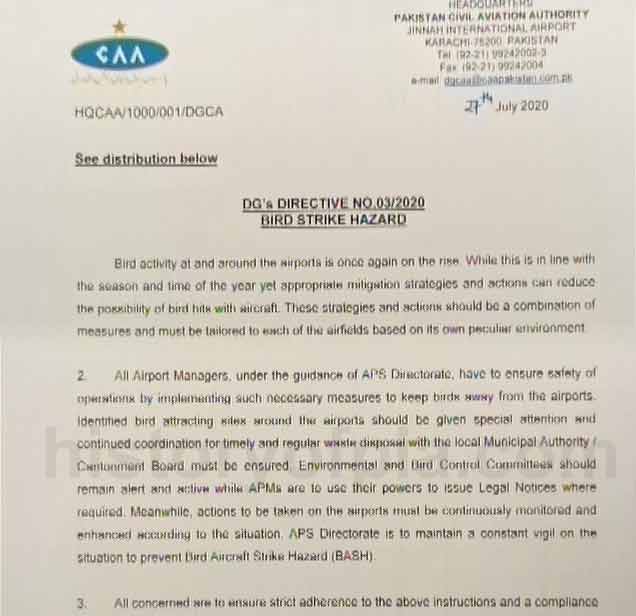 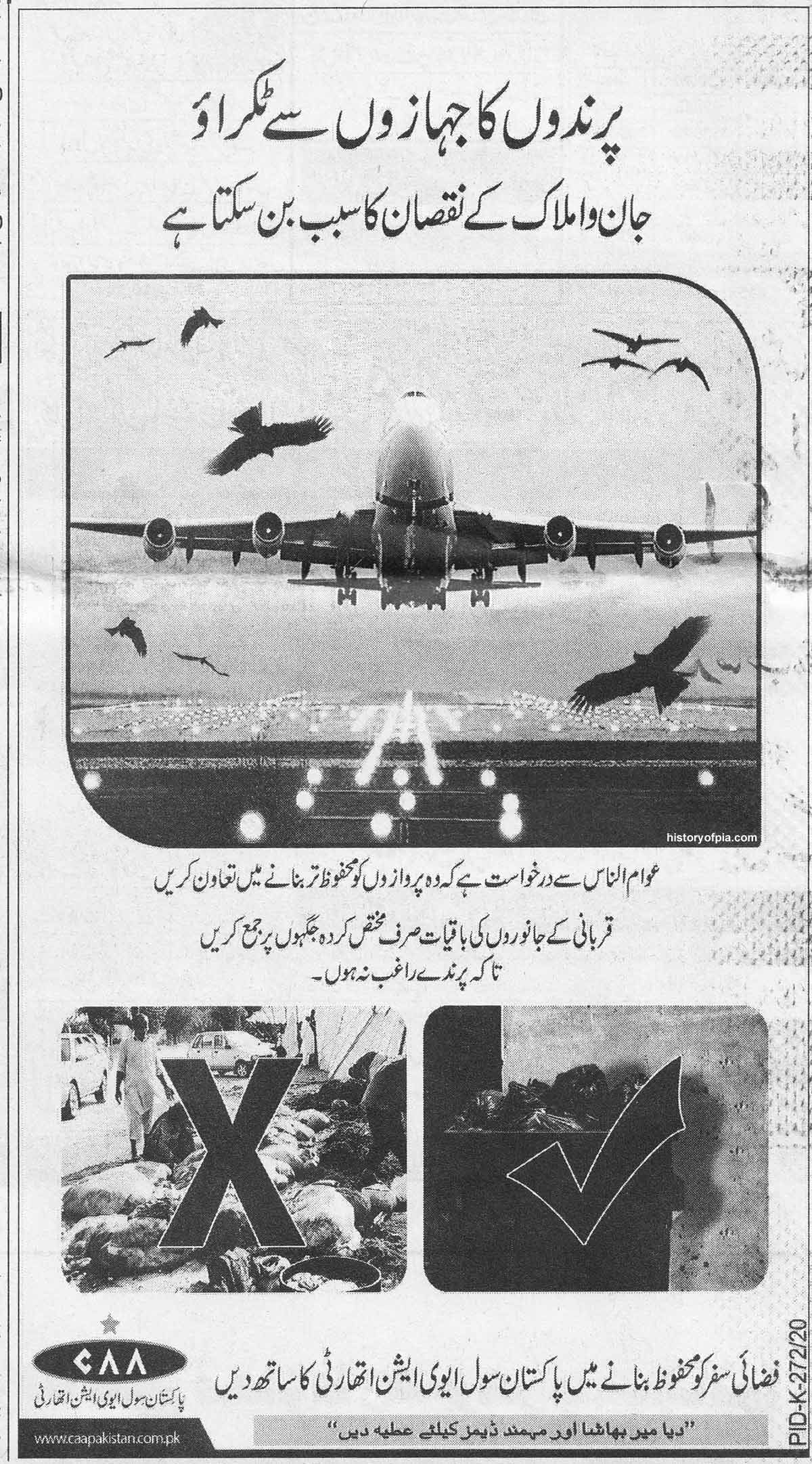 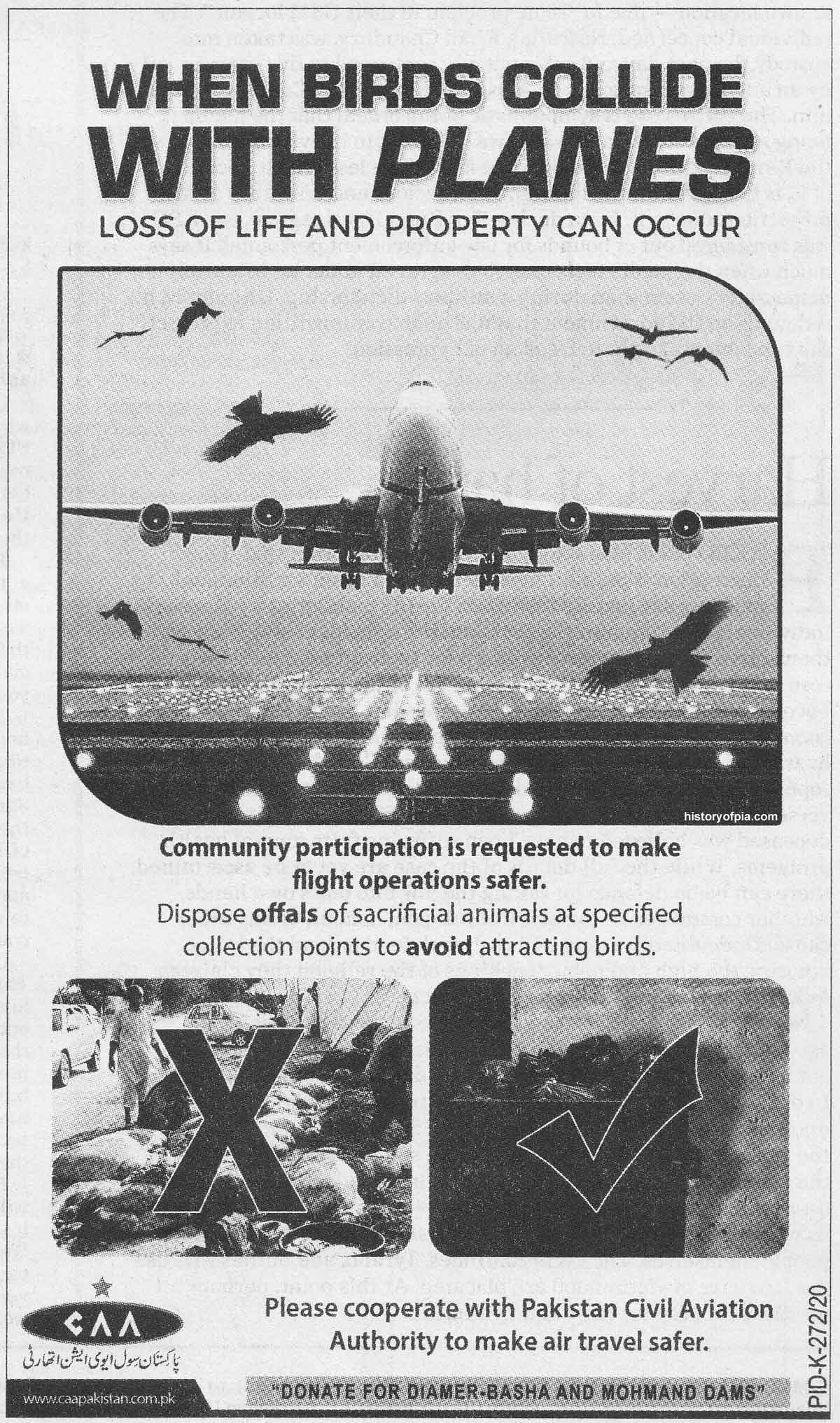 Special teams formed by Pakistan CAA are checking areas around all airports in Pakistan to check animal offal dumped in undesignated areas. The teams will ensure removal of animal offal from such areas near airports.