Isn't this hotel already managed by a third party or a hotel management company? What kind of increased revenues will leasing out bring to PIA?

Chief Justice of Pakistan Gulzar Ahmed said the news of PIA privatisation is a ‘joke’ with this prestigious national department. He said the real target was New York, not the privatisation of PIA.

The Roosevelt Hotel New York City owned by Pakistan International Airlines (PIA) subsidiary PIA Investments Limited (PIAIL) will not be sold, National Assembly's standing committee on Privatization was informed today. The hotel will be leased out on long term lease or operated under a joint venture agreement.

ISLAMABAD: The government has no plans to sell the Roosevelt Hotel in New York. Instead it is considering to run it as a joint venture, the National Assembly’s Standing Committee on Privatisation was informed on Wednesday.

In a meeting of the National Assembly’s Standing Committee on Privatisation held on Wednesday, it was informed that the federal government, on the recommendation of the privatisation committee, has decided to lease the said hotel.

The committee was surprised to know that the cabinet had made this decision “on a one-line paragraph summary” forwarded by the privatisation committee.

It was also surprised to know that the PIA Investments Limited (PIAIL), which owns the hotel in New York, was registered in British Virgin Island.

nterestingly, during the meeting, a consultant hired for privatisation informed the committee that the federal cabinet had already approved a summary regarding the “privatisation” of Roosevelt Hotel.

However, Privatisation Minister Muhammadmian Soomro clarified said that the hotel was being given on long-term lease and was not being privatised. “The amount that would be received as a result this step would be spent on the revamping of PIA.”

He also claimed that unlike the impression, the hotel was not making profits for the past few years.

“Selling the hotel in New York will cost a lot in taxes, therefore, the ministry is considering a proposal to operate the hotel through a joint venture or leasing it out on a long-term basis.”

He continued, “We are not selling the Roosevelt Hotel. Its location is very important, but its income is declining. Leasing out the property is the best option for Pakistan,” the minister said.

During the meeting, which was chaired by MNA Syed Mustafa Mahmud, the committee showed its displeasure over the absence of the PIAIL managing director and finance director. The Aviation Division officials informed the committee that the said officials were travelling overseas for pre-arranged meetings and hence could not participate in the scheduled standing committee meeting.

However, the committee chairman directed the division to ensure the presence of PIAIL officials in the subsequent committee meeting so that they could brief properly on PIAIL’s privatisation.

ISLAMABAD: The Cabinet Committee on Privatisation (CCOP) is taking up the privatisation of Roosevelt Hotel, Manhattan, New York, which is owned by the Pakistan International Airlines (PIA).

As per a “secret, most urgent” notice dated June 19, issued by the Cabinet Division, a copy of which is available with The News, the CCOP is scheduled to meet on Wednesday. However, when contacted, Privatisation Ministry/Commission Secretary Rizwan Malik told this correspondent that the meeting may be held on Wednesday or Thursday because of the session of the federal cabinet.

The summary for the privatisation of the Roosevelt Hotel has been prepared by the Aviation Division. Adviser on Finance and Revenue Dr Hafeez Shaikh will chair the discussion, to be held in the prime minister’s office. The ministers for communications, law and justice, privatisation and power and advisers on commerce and investment and institutional reforms and austerity have been invited to attend the deliberations. Special invitation has been given to the minister for industries and production and the State Bank of Pakistan governor, among others.

Rizwan Malik said the Roosevelt Hotel was not being sold, as was generally understood from the term, privatisation. He said the basic objective was to involve investors so that the PIA gets handsome money to improve its conditions and the asset is utilised in a beneficial manner.

The secretary agreed that it was not a good time to seek investment in view of the COVID-19, which has affected the business across the globe. He said the process would take a long time as a lot of things were yet to be sorted out before the privatisation. 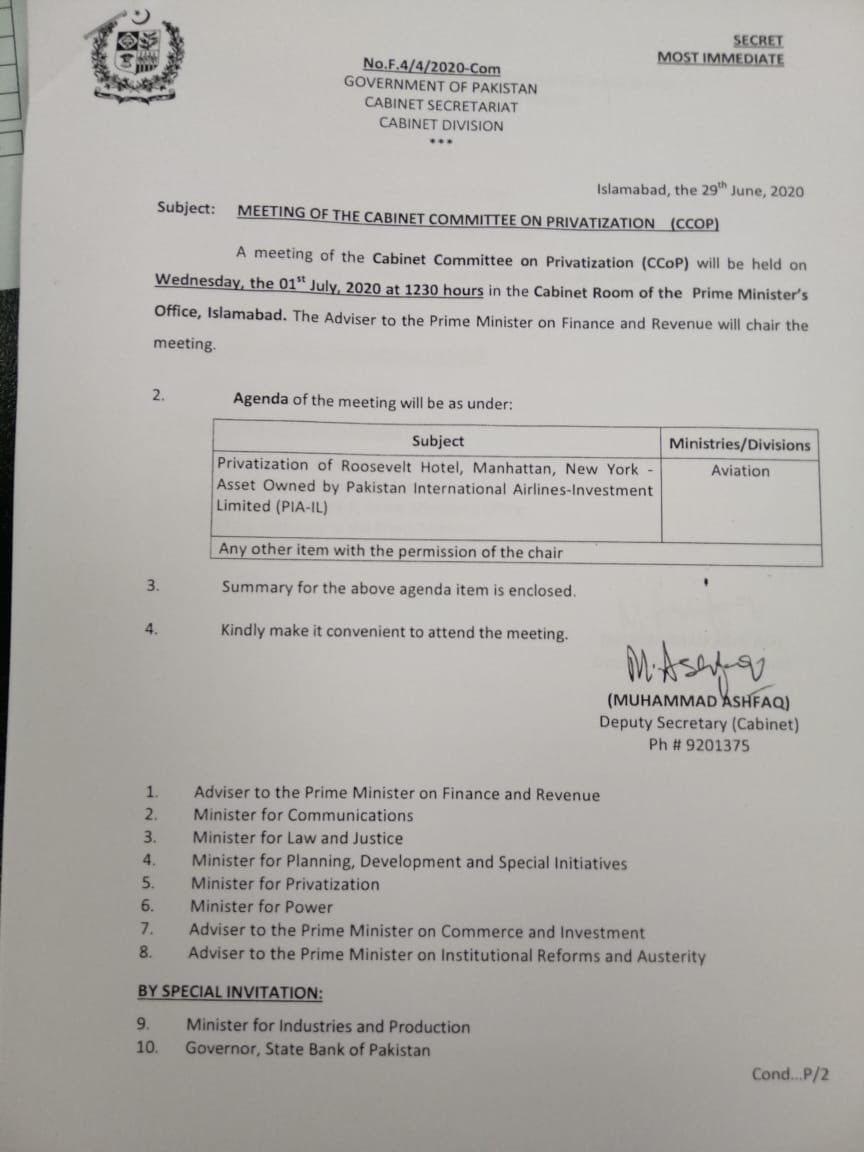 ISLAMABAD: The federal government has deferred discussions on the privatisation of Roosevelt Hotel, Manhattan, New York.

Today, the Cabinet Committee on Privatisation (CCoP) will discuss a single-point agenda of privatisation of Roosevelt Hotel, Manhattan, New York owned by the Pakistan International Airlines Investment Limited (PIAIL) a subsidiary of the PIA.

Cabinet Committee on Privatization (CCoP) has rejected proposal to privatize or lease out Roosevelt Hotel.

Offices in hotel building will also be available on rent.

Adviser to the Prime Minister on Finance and Revenue, Dr Abdul Hafeez Shaikh chaired the CCoP meeting, which reviewed one point agenda on the Privatization of Roosevelt Hotel (Manhattan, New York) asset owned by PIA-Investment Limited, according to press statement issued by the Finance Ministry.

According to press statement, as requested by the Aviation Division, CCoP decided to de-notify the Roosevelt Task Force formed earlier under the chairmanship of Minister for Privatization for framing Terms of Reference for leasing the Roosevelt’s site for setting up a joint venture project.

CCoP also directed PC to hire a financial adviser to start the process for the transaction in the light of the report of Ms Deloitte from July 2019 which recommended “that the highest and best use of the Roosevelt Hotel Property is to redevelop the site into a mixed use (through Joint Venture) of primarily office tower over retail and condominium”.

The statement added that it was also directed that Ms Deloitte would update its study on the hotel transaction in the next 4 weeks and the same shall be shared with the CCoP.

Even if half of what he is saying is true it boggles the mind how evil minds work.