PIA not being privatised, Senate told

ISLAMABAD: The Senate was informed on Friday that the national flag carrier was not on the privatisation list.

Winding up a discussion on a calling-attention notice on suspension of PIA flights in European Union countries, Aviation Minister Ghulam Sarwar Khan said the restructuring of the Pakistan International Airlines was on the cards.

He rejected the allegation that his statement on dubious licences of pilots was an effort to bring the state-owned airline to the verge of collapse to pave way for its privatisation.

He said the European Aviation Safety Agency’s (EASA) ban on PIA flights in EU countries and three cities of the UK had been imposed neither due to the PIA plane crash in Karachi nor because of his statement that some of PIA pilots possessed fake degrees. “This is an old issue as the PIA has been facing questions on safety standards since 2007.”
Top
Top

Work on preparing Terms of Reference (ToR) has begun for redevelopment of Roosevelt Hotel property into a mixed use of primarily office tower over retail and condominium through joint venture.

Services of financial advisers consortium will also be acquired.

PIAIL given permission for in-camera briefing

ISLAMABAD: A parliamentary panel on Thursday has granted permission to the management of the Pakistan International Airlines Investments Limited (PIAIL) to give in-camera detailed briefing on the privatisation of the Roosevelt Hotel, New York, in the next meeting of the committee.

The committee deferred the briefing on Roosevelt Hotel, which was on the agenda of the meeting on the request of the managing director PIAIL.

The in-camera briefing on the privatisation of the hotel will held in the next meeting and the media persons will not be allowed.

The managing director, PIAIL, requested the committee that due to some issues we may be allowed to give in-camera briefing on the Roosevelt Hotel.

He also requested that a financial advisor (FA) was being appointed by the Privatisation Commission to undertake the envisaged leasing of the Roosevelt site for setting up a joint venture project for prospective mixed use development, through the best suited mode of privatisation as delineated in the PC Ordinance, 2000.

The committee recommended arranging in-camera detailed briefing on Ms Deloitte report regarding privatisation of Roosevelt Hotel in another meeting.

The minister for privatisation stated that it was not a conducive business environment for the aviation industry because of air restrictions due to Covid-19.

“It would be not a wise decision to put PIA on privatisation,” he added.

He said the aviation sector and renowned airlines worldwide had become bankrupt and were facing a financial crunch.

Defending the decisions of the Privatisation Commission, he said that investors were always interested in the privatisation of profit-making government entities and government gets good price.

He further said the profit-making entity did not get good price than it would face difficulties in selling them again.

He said the government had aimed at increasing foreign inflow through privatisation of loss-making entities. 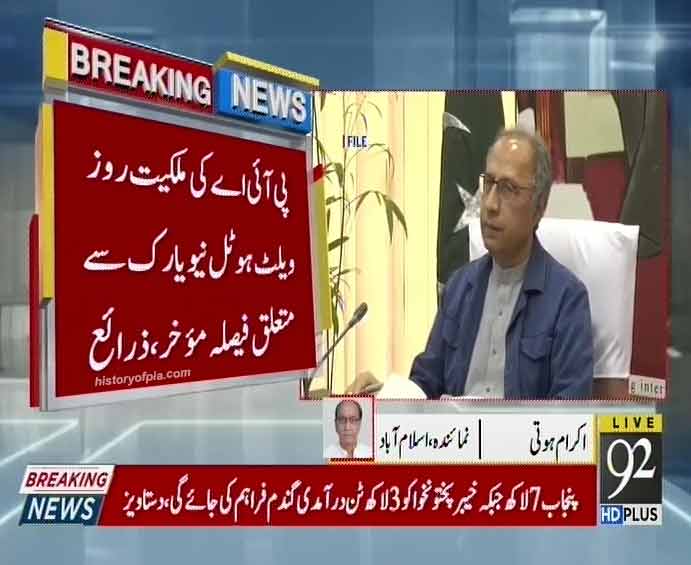 On August 27, Adviser to the Prime Minister on Finance and Revenue Dr. Abdul Hafeez Shaikh chaired Economic Coordination Committee (ECC) meeting and said that all decisions related to the Roosevelt Hotel will be taken in national interest in transparent manner.

Dr. Abdul Hafeez took notice of the absence of the Secretary Aviation and said that all stakeholders including Secretry Aviation need to be part of talks on issues related to the hotel.